Chinese New Year slot from Blue Gem is a 3D online slot game whose theme is based on the Chinese New Year, which is an occasion that is celebrated with fireworks. Various fireworks make up the imagery and reel symbols while a panda and a Chinese dragon stand alongside the reels.

Blue Gem’s Chinese New year slot has five reels, three rows and thirty optional pay lines. As with all of Blue Gem’s online slot games, up to five coins can be placed on each of the pay lines and the coins come in values of anything from 0.01 up to 1.00.

The online slot game’s jackpot prize can amount to 3 750 coins when five symbols land in a row on an enabled pay line that has the maximum of five coins placed on it. This prize is awarded for five of the symbols that display fireworks in a box.

There are two different scatter symbols that trigger two bonus game features but neither of them pay out scatter wins. These scatter symbols are represented by the tubed fireworks and the red smiling rocket symbols. 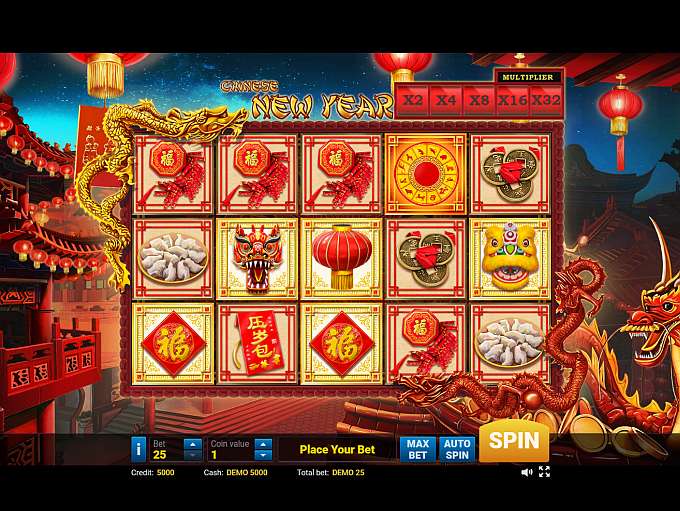 Three or more of the tubed fireworks landing on their respective reels will award the extra cash bonus feature. At this time a surprise cash prize is awarded which is multiplied by the number of active paylines and the payline bet.

Three or more of the red smiling symbols landing on the respective reels will bring up a selection of boxes. The boxes then need to be opened to reveal the mystery rewards that are free spins and multipliers. This feature makes this one of the most exciting slots games with no download Australia has to offer to players online.

Once the selection is complete the free spins are played on separate reels that do not include either of the Chinese New Year slot scatter bonus symbols. This essentially means that the feature cannot be re-triggered.

When the reels produce a winning combination, taking a chance in the Chinese New Year slot gamble game can double the winning amount. Clicking on the double up button will activate this gamble game.

The screen will then display a panda that rolls the dice, which will either reveal an odd value or an even value. In order to win the double up feature, either an odd or even option needs to be chosen before the dice are rolled.

If the choice is correct the win is doubled but a wrong choice results in the win being lost.

Have a Classic Casino Experience with Diamond Wild Slot!